Stories from behind the mirror. Recollections of SFBT’s early days, by the founders of brief therapy.

Notes from a session at EBTA conference, Malmo, 5 September 2010

Eve: The difference now is that the dream has come true. From six people with no money in a think tank – and it happened. Here we are at an international meeting of people with the ideas we developed and trained.

The prevailing Milan model was to create an intervention message from behind the mirror. Eve noticed that the interviewing process seemed to be an intervention in itself. This was an interactional process of co-operating with the client, a context for making the techniques work. So it matters how we meet them, how we join them. There were parts of the relationship – to do with living beings - that words can’t describe. She was not so keen on the view that there is nothing but language, or that the work could in theory be done by a computer. Now, she says, I’m much more patient and much slower with clients.

Gale and the other panellists swiftly said they remembered Eve as patient and methodical all along.

Wally arrived in 1982, as a trainee, supervised by Eve. Steve pushed for the minimalist thing, rarely made eye contact with client; unlike Eve who was more motherly, bringing in things she’d found worked elsewhere. Eve aimed to copy Insoo Kim Berg’s therapeutic style, discovered she actually couldn’t do it that way, and decided
to be herself.

John arrived as a trainee in same class as Wally, found Steve rather gruff, ‘especially if we left the video cameras running’. He was excited by the experimentation, with even Brian Cade turning up and telling jokes. Eve: “I wasn’t patient, I was frozen with fear.”

Comment by Paolo Terni on September 9, 2010 at 19:04
Thank you Paul for posting this and thank you all for sharing additional comments, observations, stories.

Comment by Alan Kay on September 7, 2010 at 12:13
Wonderful to be reminded of the origins and to think of the great outcomes since. And, the journey has just begun!

Comment by Bärbel Fink on September 6, 2010 at 22:58
Hi,
Thanks for these glimpses. Anyone know if the session was filmed?
It would've been a shame not to ...
Bärbel

Comment by Sussan Öster on September 6, 2010 at 21:55
Thank you Paul. Since I was too late into SF to meet Insoo and Steve it's interesting to hear stories from other important people in the early process. Anton, I'm qurious about both the philosofy and the tools! so useful to simuntanesly lern both to keep the core SF-thing going, I think. One question: do these founders of SF say that they developed SF partly from Systemic terapie or maybe just that there are similarities or...? 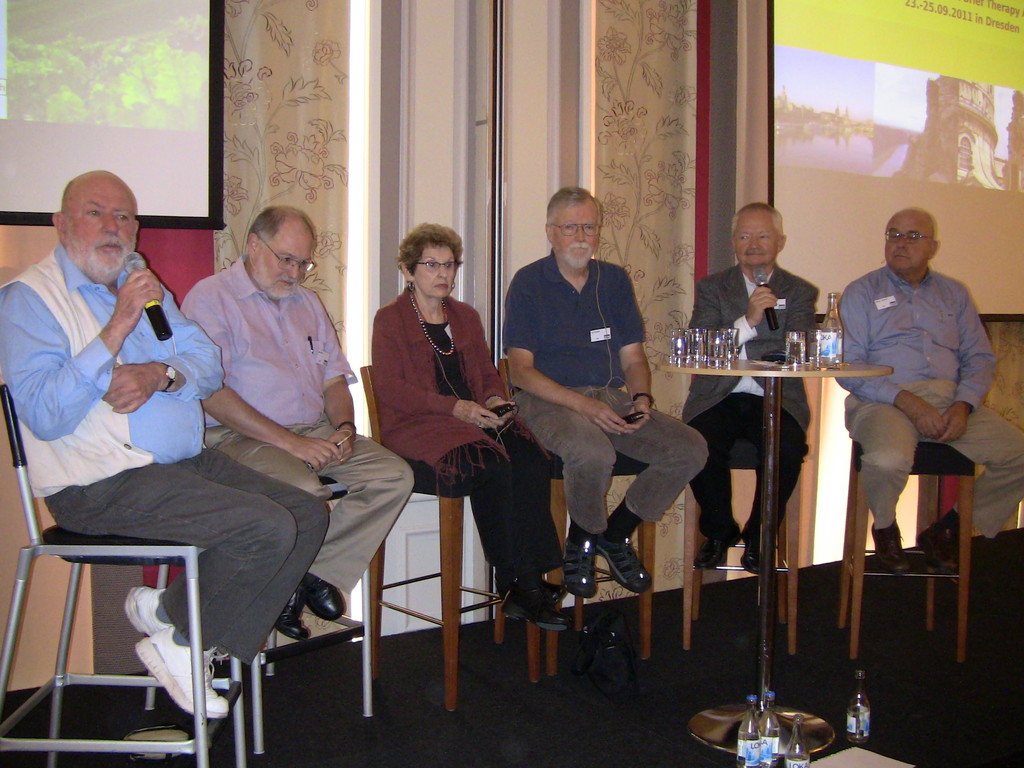 Comment by Katalin Hankovszky on September 6, 2010 at 9:45
mmh, nice how history of an approach is visible in these glimpses from biographies :)
and: "How we should take our SF trainings more seriously, and go beyond technique" - what were ideas expressed on that? and how do YOU do that, guys?

Comment by Anton Stellamans on September 6, 2010 at 9:36
Thanks for sharing this, Paul. This was an absolute highlight of this conference. I was so happy to hear them talk about the constant changes in the practice (territory) and the description of the model (map). Their extravagant creativity in experimenting with new techniques and interventions... (e.g. using an I Ching table behind the mirror). Their freedom to break the rules they just had described. (John mentioned that he was puzzled in one session in which he saw Steve making direct suggestions to the client.) And their curiosity and appreciation for someone who applied SF to a group of clients with which they had no experience (substance abuse). I also loved Gale's picturesque description of what was going on there: truckloads of pizza, people walking in and out of the center through the backdoor, the lights of parking cars blinding the people behind the mirror, the stretching, the untouched fruit in the refrigerator, the telephone conversations... I also valued the final discussion on how we should take our SF trainings more seriously, and go beyond technique and model and talk about the philosophical implications of this model.

Comment by Svea van der Hoorn on September 5, 2010 at 16:42
Thank you - as one of the sad mournful ones who couldn't re-organise myself to be at Malmo twice this year, I appreciate your giving me some glimpses. Svea