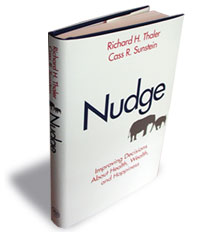 I recently read the book Nudge by David Thaler and Cass Sunstein. Subtitled Improving Decisions about Health, Wealth and Happiness, the book connects to the movement in behavioural economics which looks at what people ACTUALLY do when faced with choices, rather than what they OUGHT to do if they acted rationally. Thaler and Sunstein talk about people acting as 'choice architects' for their customers or users. For example, the way food is displayed in a cafeteria will affect the choices made by the customers. There is no way out of having an affect, the question is how to use the affect - to promote health, to make money, whatever. Tiny changes can have large impacts on what people choose - they call these Nudges. One interesting facet is the role of 'priming'. When people are told or asked about something, they are much more likely to have this affect their choice than if nothing is said. This is an unconscious thing, people are not aware that they are being affected. The authors refer to a classic experiment in 1965 (Leventhal, Singer and Jones at Harvard) about tetanus injections. Educative lecture about risks leaves students convinced to get the injections - but only 3% actually follow up. Others had the same lecture, then given a map with clinic circled, asked to look at diaries and make a plan for when they would go, and also plot the route they would take to the clinic. 28% followed up - a 9 fold increase. Another aspect is the importance of feedback and frequency in making decisions. People make better decisions if they make such decisions often, and if the feedback is quick. So, some people make poor decisions about, for example, getting married - partly because such decisions are very rare and the feedback takes a long time. About much more mundane things (what to have for lunch, what kind of movie do I want to see). Simply practicing doing something two or three times can have a very positive affect on the quality of the decision in the eyes of the decision-maker. I see a link to SF here. Our small steps are very much in this line of things which can be decided and done quickly, in an everyday way, with fast feedback, and tried again quickly if they seem useful. An interesting connection. I have written to Richard Thaler about this and he asked me to send info on SF which they might use in their blog (you can see it on their website www.nudges.org). I'll keep you posted.

Comment by Hans-Peter Korn on December 19, 2008 at 23:16
Interesting!
Concerning this:
"Another aspect is the importance of feedback and frequency in making decisions. People make better decisions if they make such decisions often, and if the feedback is quick."
we have a parallelism in "agility":
The "Scrum"-framework in example encourages to have a high frequency of (short!!) meetings, especially the "daily scrum" making decisions and giving feedback. Please have a look here: http://www.scrumalliance.org/pages/what_is_scrum

Comment by Paolo Terni on December 19, 2008 at 20:23
HI Michael!!
I was sure you would post a comment on this thread!! :)
We talked about nudge, didn't we? Though mainly about the concept of libertarian paternalism.
BTW, Gilbert has a new lecture up on TED, check it out, engaging and informative as usual.

Comment by Michael Hjerth on December 19, 2008 at 17:45
ah, books I like. I'd like to add Don Airley's Predictably Irrational too. Also , the father of behavioral economics, Daniel Kahneman is now into happines. Gilbert has pointed out elsewhere (on his TED lecture from 2005) that one important point for "big decisions" with little or no feedback until a long time (marrige, retirement-funds, etc) is to make the future picture as detailed and concrete as possible. In my view, this results in a "virtual feedback", that is reinforcing and helps decisions. I'd think, though I'd need a fMRI to show it, that imagining a prefered future would actually activate nucleus accumbens and the reward system.

That reference about the tetanus injections is something that you can find in other books about psychology (I remember finding it in Wilson's "strangers to ourselves", but it was not new to me).
I also included it in my book "coaching leaders", published in 2007 - unfortunately the book is in Italian :(
The whole point was to find a rationale for specific SF techniques, and in the case in point why imagining the future (i.e. asking about the preferred future) is useful - and the more detailed and specific, the better.
That study seems to support this SF practice.
Gilbert ("Stumbling upon happiness") kind of makes the same point, but starting from the flip side of this very same coin: we make mistakes in judging what we will like because we fail to take details into consideration when making a choice.
Just a quick note, I have to split now, talk to you later!

Comment by Mark McKergow on December 19, 2008 at 15:11
Thanks - your page has lots more information about the book, well worth looking at. Here is it with a link: http://www.briefcoachingsolutions.com/choice-architecture/. What is the paper - where will it be published and when?

Comment by Paolo Terni on December 19, 2008 at 14:42
Hi Mark!!
Yeah, that is a great book!!
I noticed a lot of parallels with SF, too.
I posted about it on my website: http://www.briefcoachingsolutions.com/choice-architecture/
Thanks for contacting Thaler, I am very curious to see what this connection might bring!!
Ciao,
Paolo

PS: and that part re experiments about tetanus injections is included in the article I am writing with Peter and Michael