Early bird deadline for SOLWorld 2016 conference is the end of March!

The wonderful SOLWorld 2016 conference is booking up.  Remember that the cheapest way to get there is to take the early bird discount and book before the end of March 2016.  Full details at the conference page http://www.solworld.org/notes/SOLWorld_2016_international_conference.

My new book 'Host' is out at last! 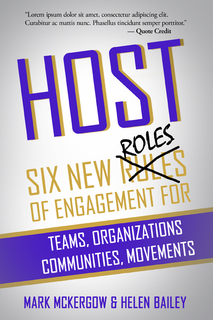 Get it from amazon.co.uk http://amzn.to/1tdSv3Y or…

Mark is very involved with setting up the first SF research conference. This two-day event is a co-production of SFCT and the University of Hertfordshire, and will take place on 19-20 September 2013 in Hatfield, just north of London.

The conference (www.asfct.org/research.php) will present and build dialogues around these topics: You may have read something about the Solution Focused approach, perhaps even tried it out… but how to get first-class learning in applying SF thinking and practice to your work?  Mark McKergow’s latest online course, SF Business Professional, is starting on 15 September 2012.  Run in association with the University of Wisconsin Milwaukee (the home of SF therapy), the…

The J-SOL 5 conference in Kyoto, Japan was a huge success.  Read my illustrated report on the event at http://www.sfwork.com/pdf/J-SOL5report.pdf. 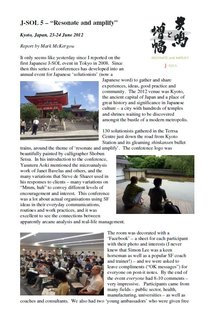 Steps to an ecology of conversation

An exploration of the word and the world

SF and Kaizen: Not all small steps are equal?

Last year I was lucky enough to be lead facilitator at the TED Fellows Collaboratorium event in New Orleans (link).  The event was to bring together the brilliant young TED Fellows group with coaches and mentors, working on real issues in quite large groups – something of a facilitational challenge. As part of my role I wrote a facilitators’… 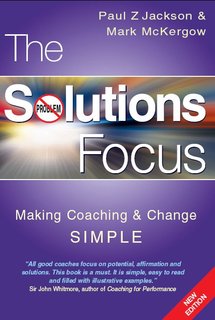 It’s ten years to the day since the first edition of The Solutions Focus book was published.  I’ll always remember 8 February 2002 – because it was the first day of the SOL 2002 conference, the first of the astounding series of SOLWorld events over the past decade.  So, it’s a good moment to look back on what’s happened over the intervening period and also indulge in a…

The evolution of 'SF Theory' - discussion transcript from EBTA Dresden

I was very honoured to be asked by Heike Schemmel to host a discussion group on the 'evolution of SF Theory' at the recent EBTA conference in Dresden, October 2011.  The invited participants alongside me were Gale Miller, Rayya Ghul and Kirsten Dierolf.   Also participating were Michael Durrant, Michael Hjerth, Carey Glass, Jenny Clarke, Bertil Andersson,  Wolfgang Gaiswinkler, Klaus Schenck and Aviva Suskin-Holmqvist.

I have had the session transcribed.  You can read it by clicking…

Thirteen intrepid coaches, consultants and managers joined me on the first online SF Professional course this summer.  Running online in conjunction with the University of Milwaukee Wisconsin (with its historic links to Steve de Shazer and Insoo Kim Berg), the programme featured sixteen weeks of readings, discussions, exercises, coaching practice and a project – just like…

This year saw the TENTH international SOLWorld conference!  It’s all come a long way from the initial plans of a few people (including me) in the Hatchet pub, Bristol in 2000 to hold a meeting for anyone interested in applying Solution Focused ideas to organisational work.

This year we were beside Lake Balaton, Hungary in the delightful setting of the Grand Hotel Anna.  Over 120 people from 23 countries gathered to share and build SF practice in organisations, including people from…

Leading Conversations Radio features weekly conversations with leadership thinkers, writers and developers.  The show is introduced by Cheryl Esposito and has hosted many top people - Peter Senge appears in a couple of weeks time.  But before that. you can hear me!


This three part interview covers many topics including Solutions Focus, the implications of… Continue 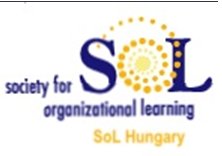 We have an exciting new venture starting later this year.  sfwork, in partnership with leading London-based cross-cultural specialists Coghill Beery, will be offering a new workshop – Solutions Focus for Cultural Diversity.  The event is promoted by the Society for Organisational Learning Hungary, and we hope to attract participants from across Europe to Budapest for the… Continue

It works like this: Suppose that someone has given us $10 million to set up an multi-disciplinary academic centre, probably based at a university, to produce excellent and provocative material in support of the 'SF paradigm' - the framework within which our…

We were honoured to have Professor Daniele Moyal-Sharrock join us in Bucharest as a plenary speaker. Daniele is Professor of Philosophy at the University of Hertfordshire, UK, and one of the world's leading Wittgenstein scholars. She is also President of the British Wittgenstein Society (http://www.britishwittgensteinsociety.herts.ac.uk/).

The 2010 SOLWorld conference was held last week in Bucharest, Romania. I have just returned from an exciting, thought-provoking and exhausting few days, and wanted to jot down a few thoughts about it all.
The event was held in two adjoining hotels (the Ramada Parc and Ramada Plaza) – this worked very well, with a big plenary room in one and nice workshops rooms in the other. We met on Wednesday evening for a buffet meal – always so many people to say hello and reconnect…

Holacracy - organising with dynamic steering, not predict and control

I have just completed a very interesting online course (four 3-hour sessions over two weeks) in Holacracy – an exciting new way of organising. I use the verb ‘organising’ carefully here, as one of the most interesting aspects of Holacracy is the way it embraces continuous change and movement, with careful language and structured processes that embrace and utilise the change that’s inevitably happening.

Holacracy (the word comes from holarchy, not holistic or holon) is described as…

There will be a major conference in Budapest later this year. The first OD World Summit is happening from 22-26 August 2010. Even better, SF will have a good role there - SFCT have been accepted as one of the official 'supporting organisations' alongside Appreciative Inquiry, Open Space, World Cafe, OD Network and many more.
You can find out…
Continue