A case study: a solution-focused approach to reducing hospital infections

It seems to me solution-focused strategies are blossoming everywhere. Or maybe I see them everywhere. Whatever the case might be, I was not expecting to find anything regarding Solution-Focused approaches in a book whose subtitle is: "a surgeon's note on performance" (the book is
BETTER, the author is Atul Gawande). Yet, there it was: a perfect case study in Solution-Focused strategy, right there in Chapter 1("on washing hands"), even though nowhere in the book the words "solution-focused" are mentioned. I thought it could be worthwhile to share this case study, because it is an excellent example of Solution-Focused processes at work. In the first pages of chapter 1, Doctor Gawande sets out to introduce readers to the problem: how to increase compliance in washing hands for doctors and medical staff members. He tells readers why that is a very important goal - because washing hands is "the one thing that consistently halts the spread of infections". To have an idea of the dimension of the problem, the author quotes some statistics: "each year, according to the U.S. Center for Disease Control, 2 million Americans acquire an infection while they are in the hospital. Ninety thousand die of that infection". Yet, despite the fact that a whole bunch of different solutions have been tried out in hospitals (posting signs, repositioning sinks, increasing the number of sinks, automating sinks, issuing hygiene report cards, etc.), still doctors and nurses wash their hands on average one-third to one-half as often at they are supposed to. After talking more about his personal experience with the problem and about why it is a difficult problem, the author tells the story of an intervention in Pittsburgh, Pa. We can think of this case story as: bringing in a traditional (non solution-focused) consultant. It so happens that Paul O'Neill, former secretary of the Treasury and CEO of Alcoa, took over as head of a regional health care initiative in Pittsburgh, Pennsylvania. Experienced in solving performance issues in factories, Mr. O'Neill sent a young industrial engineer on a single 40-bed surgical unit at Pittsburgh veteran hospital. The young engineer was sent in with the task of solving the problem of how to increase hands washing behavior in the medical staff. As the author tells the story, the young engineer did not ask, "why don't you wash your hands?" He asked "why can't you?". I imagine this well-intentioned consultant to be an expert in the Toyota system and in Lean Production processes (this is my own attribution) - because since the answer he got was "time", he set about fixing things that took time: a "just in time" supply system, a re-arrangement of stethoscopes, and other similar changes. After these changes were made, infection rates fell almost 90%. A success story! Well, if you are a Solution-Focused practitioner you know there is a nag in these kinds of interventions. As you might expect, these changes, despite a lot of exhortation, after 2 years had spread to only one other unit; and the moment the young engineer left for other assignments, performances began to slide. Enter hopelessness? No! Enter a Solution-Focused approach!! A surgeon who helped the young engineer happened to read an article about a Save the Children anti-starvation program in Vietnam, run by Tufts University nutritionist J. Sternin and his wife. In their experience, over and over bringing outside solutions to the villagers had failed. Instead "the Sternins focused on finding solutions from insiders. They asked small groups of poor villagers to identify who among them had the best nourished children... The villagers then visited those mothers at home to see exactly what they were doing... The villagers discovered that there were well-nourished children among them, despite the poverty, and that those children's mothers were breaking with the locally accepted wisdom in all sorts of ways - feeding their children even when they had diarrhea, for example;..." The Sternins called their approach "positive deviance". The surgeon, Jon Lloyd, impressed by this idea, set out to try it, again in Pittsburgh veteran hospital. He held a series of "thirty minute, small group discussions with health care workers at every level... The team began each meeting saying, in essence, "we are here because of the hospital infection problem, and we want to know what
you know about how to solve it". No charts, no presentation, just that simple question. Is this Solution-Focused in its essence, or what? Not surprisingly, "ideas came pouring out. People told of places where hand-gel dispensers were missing, ways to keep gowns and gloves from running out of supply..." Everything changed: nurses would speak up if doctors were not wearing gloves; non-compliers were pressured by peers to conform; when new hand-gel dispensers arrived, staff members decided where to put them; and so on. Of course they made sure to publicize the ideas that worked and the small victories on the hospital website and newsletter. To cut a long story short: "one year into the experiment - and after years without widespread progress - the entire hospital saw its MRSA wound infection rates drop to zero." Yeah! In these stories we can find all the ingredients of solution-focused interventions: - treating people involved as experts - finding resources and exceptions within the system (organization, village) - finding out what these "exceptions" are doing differently - focusing on what is working - amplifying the small successes et voilà, we have sustainable solutions because they come from inside the system itself, from the people involved!! 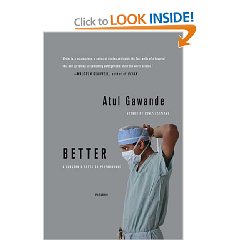 It was me (at least) who tried to contact the positive deviance people some years ago. I subsequently heard that their guy and SdeS had met and not got on at all, so they are not well-disposed to SF people, which seems a shame. There are definitely some parallels IMHO.

I remember that someone in our community (was it you, Mark??) tried to come in closer contact to the "positive deviance people" - without success.
So, maybe, one more try to establish such a "CONNECTION" might be helpful??

Comment by Paolo Terni on December 7, 2008 at 15:02
Vow, thanks!!
That is an honor!!
BTW, thank you, because I had been sitting on that post for a long time, then I read your post about language, and I was motivated to post myself!!
Ciao,
Paolo

Comment by Coert Visser on December 7, 2008 at 13:16
Hi Paolo, interesting, isn't it? On my blog I refer to your post. (by the way it is my 500th post on www.solutonfocusedchange.com). Here it is: An SF-approach to reducing hospital infections